(Update: some direct action solidarity took place in Bristol late on 23 Feburary. A communique posted on the Bristol Indymedia newswire claimed an attack on the Royal Bank of Scotland in central Bristol).

Opposition to the winter olympics on stolen native land continues, across Canada and internationally, despite heavy policing and arrests. 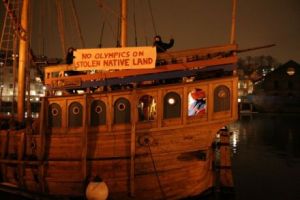 There is a report of the 17 February protest in Bristol here. END_OF_DOCUMENT_TOKEN_TO_BE_REPLACED

Yesterday 17 February saw a small low key protest in Bristol, organised in solidarity with the anti-olympic protests in and around Vancouver in the Canadian state of British Columbia. The protest was called after Bristol ABC hosted a cafe and info night at Kebele social centre on Sunday 14 February, which focused on the attacks on the rights of indigenous (native) peoples in Canada, and the ongoing theft of their lands – which has been going on for over 500 years.

The promotion and organisation of the winter olympics in Vancouver has stimulated growing resistance from a broad coalition of communities and campaign groups, that has received an increasingly sympathetic hearing amongst the wider population as the massive costs of the olympics has become clearer, and the information known about the environmental impact has become more detailed – for example in excess of 100,000 trees have now been felled to accommodate the olympics. The Canadian government faces growing anger in relation to the olympics, and the economic mess Canada is currently in. No surprise then that at the end of December 2009, the Candian PM suspended Parliament until early March 2010, in a move that also put an embarassing inquiry into Canada’s complicity with the treatment of detainees in Afghanistan onto the backburner. The olympics and democracy? Yeah right! END_OF_DOCUMENT_TOKEN_TO_BE_REPLACED

Once again Bristol ABC is delighted to be helping distro ‘Certain Days: the 2010 Freedom For All Political Prisoners Calendar’, which this year has a focus on Indigenous Resistance.

This beautiful 44-page calendar is packed with superb full colour artwork, alongside extensive writings on the prisoners, campaigns and communities represented. It includes artwork by Martin Mantxo, the former Bristol street artivist and co-founder of Kebele social centre, who has now returned to his native Basque country (where he remains extremely active and artistic!). If you are looking for the perfect politically conscious gift supporting some vital causes this solstice/new year, then this is it! END_OF_DOCUMENT_TOKEN_TO_BE_REPLACED

As Britain’s 2012 summer Olympic budget gets ever bigger, and we face an ever greater financial bail out for it using public (our!) money, and whilst private contractors get fat on profits from so-called Olympic regeneration, and politicians preen themselves in front of the cameras, here comes news and lessons to learn from Vancouver’s 2010 Winter Olympics opposition: END_OF_DOCUMENT_TOKEN_TO_BE_REPLACED