I currently reside at a halfway house in Brooklyn, serving out the last few months of a seven-year sentence for my role in arsons credited to the Earth Liberation Front (ELF) at two lumber companies in Oregon in 2001.  My case, and the federal government’s rush to prosecute environmental activism as a form of terrorism, were recently explored in the Oscar-nominated documentary, If a Tree Falls: A Story of the Earth Liberation Front.

What has received less attention, though, is what happened to me while in federal prison.  I was a low security prisoner with a spotless disciplinary record, and my sentencing judge recommended that I be held at a prison close to home.  But one year into my sentence, I was abruptly transferred to an experimental segregation unit, opened under the Bush Administration, that is euphemistically called a “Communication Management Unit” (CMU).  Since August 2008, when I first arrived at the CMU, I have been trying to get answers as to why I was singled out to be sent there.  Only now — three years after I filed a federal lawsuit to get to the truth — have I learned why the Federal Bureau of Prisons (BOP) sent me to the CMU: they simply did not like what I had to say in my published writing and personal letters.  In short, based on its disagreement with my political views, the government sent me to a prison unit from which it would be harder for me to be heard, serving as a punishment for my beliefs.

END_OF_DOCUMENT_TOKEN_TO_BE_REPLACED 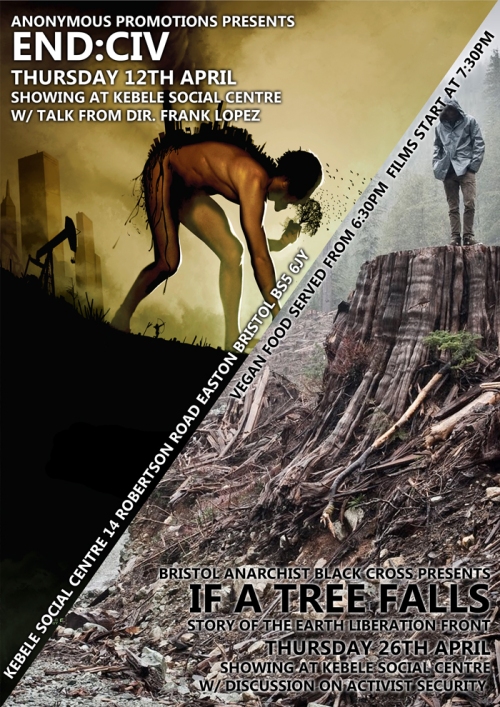 In December 2005, Daniel McGowan was arrested by Federal agents in a nationwide sweep of radical environmentalists involved with the Earth Liberation Front– a group the FBI has called America’s “number one domestic terrorism threat.”

For years, the ELF—operating in separate anonymous cells without any central leadership—had launched spectacular arsons against dozens of businesses they accused of destroying the environment: timber companies, SUV dealerships, wild horse slaughterhouses, and a $12 million ski lodge at Vail, Colorado.

With the arrest of Daniel and thirteen others, the government had cracked what was probably the largest ELF cell in America and brought down the group responsible for the very first ELF arsons in this country.

IF A TREE FALLS: A STORY OF THE EARTH LIBERATION FRONT (http://ifatreefallsfilm.com/) tells the remarkable story of the rise and fall of this ELF cell, by focusing on the transformation and radicalization of one of its members.

Part coming-of-age tale, part cops-and-robbers thrilller, the film interweaves a verite chronicle of Daniel on house arrest as he faces life in prison, with a dramatic recounting of the events that led to his involvement with the group. And along the way it asks hard questions about environmentalism, activism, and the way we define terrorism.

Drawing from striking archival footage — much of it never before seen — and intimate interviews with ELF members, and with the prosecutor and detective who were chasing them, IF A TREE FALLS explores the tumultuous period from 1995 until early 2001 when environmentalists were clashing with timber companies and law enforcement, and the word “terrorism” had not yet been altered by 9/11.